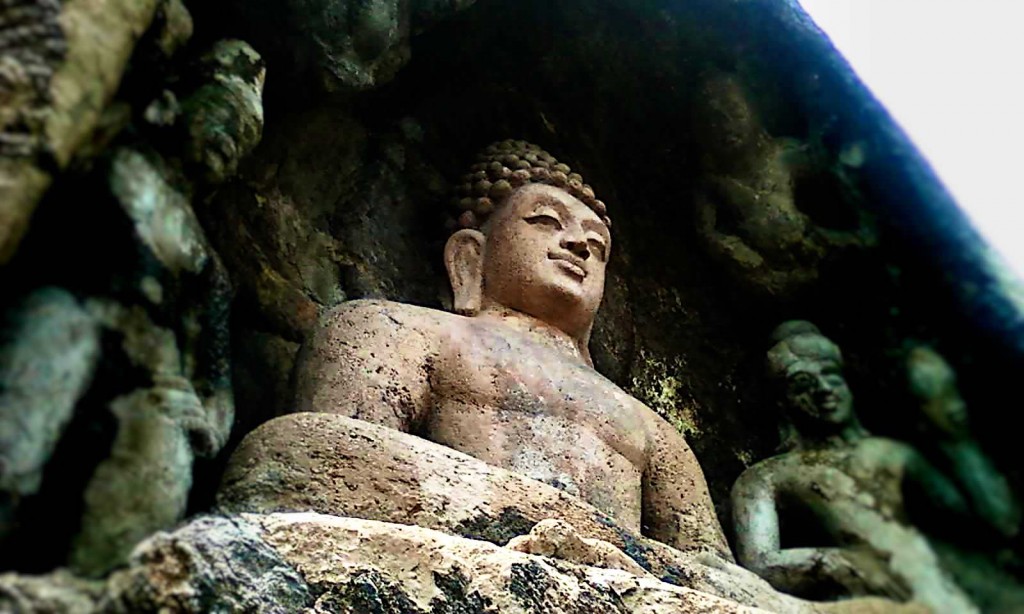 In Chinese martial arts practises are given two different labels: Inner (Nei Gong) and outer (Wai Gong). In this blog I hope to look at the relationship between these two aspects of training.

Wei Gong refers to ‘Outer Skill’, that is skills which are developed via external resistance and are most easily understood by western athletes. These may refer to strength development exercises using weights (stone locks, tiger jars etc.) or body weight (push ups, squats etc.). The term may also refer to stretching and cardio vascular exercise – the staples of the fitness industry. Wei may also refer to training iron hand, iron body and other ‘external’ skills. These skills are usually objectively measurable (I.e. they have an external, observable result such as being able to lift more weight, run faster etc.).

Nei Gong, in the wider sense, refers to ‘inner skills’ and may mean breathing exercises where one concentrates on inner energy (Qi), soft slow moving exercises where movement is coordinated with breath and awareness of energy and seated meditation exercises. These skills aim to improve the health through enhancing the functioning of the internal organs and/or improving the sense of clarity the individual experiences. Without medical tests or long term statistical measurements these ‘skills’ are largely subjective. One cannot externally ‘show’ increased vitality or the ability to resist the flu virus.

Often these approaches become polarised. People tend to divide into those who have an extroverted approach to exercise and those who have an introverted one (scholars and warriors as one of my teachers called them). There are those who like a ‘good workout’ often disparaging the ephemeral nature of internal exercises, feeling they are essentially placebos. Arguments often go along the lines of ‘those taking part in the Olympics/MMA/boxing (etc) don’t need internal exercises so clearly they aren’t useful’. Of course this is to forget that many ‘natural’ athletes have strong natural constitutions. By the time we get to the tiny percentage of those who represent their sport internationally we are looking at a blessed (and hardworking) few in their prime years. As age continues without inner training vitality tends to decline, healing after training slows and ability atrophies or declines. Excessive external training without balanced internal training (and rest, good nutiriton, etc) tend to speed up this decline.

Then there are those (mainly, it has to be said, those within the taijiquan and Qigong community) who believe that inner exercises are sufficient in themselves. They tend to think of anything that induces sweat or uses muscular tensions as ‘bad’ or ‘low level’ and that the practice will somehow interfere with their ‘inner’ development. This is a foolhardy view. Tai Ji Quan comes from a Chen village which is a traditional farming village (traditional farming involves a lot of ‘external’ exercise in and of itself) and contains many Wei Gong exercises.

The founder of the most popular form of Tai Ji Quan, Yang Lu Shan, pushed his two sons so hard with a gruelling training regime that one tried to commit suicide and the other tried to run off and become a Buddhist monk! Sun Lu Tang (the populariser of the modern notion of a division between inner and outer schools of martial art) used to punch a cannon up and down the yard whilst his son practiced exercises on gymnastic rings (this is how he met with an unfortunate accident which left him blind in one eye) – so clearly our internal kung fu forefathers did not reject Wei Gong.

Many Qi Gong practitioners point to the philosophy of Taoism to excuse an aversion to external work. My own experience of training with two Taoist sects is that they physically train extremely hard and endure great hardship (eat bitter) to cultivate themselves. Indeed the earliest western writings on Taoist adepts almost all refer to them as athletes and/or gymnasts. Of course wandering Taoist and Buddhist monks suffered great hardships (lack of food, cold etc.) which would have continually tested the inner resources.

Let us take for example if one was to practice Tibetan Tu Mo (in Taoism these are ‘Bottle Neck Breath’ exercises) this practice releases internal energy and one of the side effects is the ability to withstand extreme cold (this is a relatively minor side effect of deeper energetic work but for the purposes of illustration we will focus on it).

Now let’s say you practiced the exercises diligently but lived in California and never experienced the cold, your ability to withstand the low temperature would be extremely limited and ultimately your inner development would stall – the body develops capacities when it is pushed to do so. So in a warmer climate one would have to incrementally increase exposure to cold (either through reducing the temperature or the duration) maybe to practice a quick cold shower daily and slowly increase the duration before moving onto a cold bath. This is the same for any athlete who wishes to improve in a given field.

For a young healthy person just practicing resistance to cold may be enough to develop a tolerance to it but I would argue the more inner resources the quicker the potential adaption. If you were a 70 year old person in ill health used to central heating and three cardigans it is more than likely the first time you took a cold shower you would get poorly and your health would suffer. If someone with less resources wishes to practice it is vital they develop good health first.

We can only spend what we have in the bank. If correctly done the investment will then yield turnover increase our resources. The ideal would be an individual who lived a healthy life (the skills of this are called yang shen or nourishing life in Chinese) practice Nei Gong exercises to develop the health and exposure to cold (the Wei Gong aspect) to develop the ability and test/reinforce/refine those inner skills.

Of course, developed arts should contain both aspects already – true iron hand and iron body systems contain soft qigong methods to support the skill development, the ‘tension’ drills of external shaolin ultimately become methods of moving energy through the meridians of the body. The foundation of Shaolin was supposed to be because the inner development of the monks was stalled due to lethargy through excessive meditation (Nei Gong) so Da Mo (Boddhidarma) taught Wei Gong to rebalance and revitalise them.

It is also worth looking at the cross over points: correct body mechanics and breath work and awareness are the essential foundations for both inner and outer body work. The idea of inner and outer is only a semantic one to aid examination of yin and yang aspects of one whole.

The key to training (as with life) is finding the right balance. The correct ratio between internal and external for you. If you have a job which requires a great deal of manual labour, lifting heavy objects all day, then you will need to nourish the body with inner exercises more than someone who has a sedentary job in an office – who will probably benefit more from more Wei Gong. As you age it is also usual to need a higher proportion of ‘internal’ training in your routine. This balance will change daily according to your needs. If your routine is bringing a feeling of both vitality and clarity you are probably on the right track!

Any questions or suggestions for future blogs please get in touch till then,

The post Turn your world inside out: The relationship between inner (Nei Gong) and outer skill (Wei Gong) appeared first on Tao Jia Martial Arts Manchester.

Bricking It! The Art of Balance