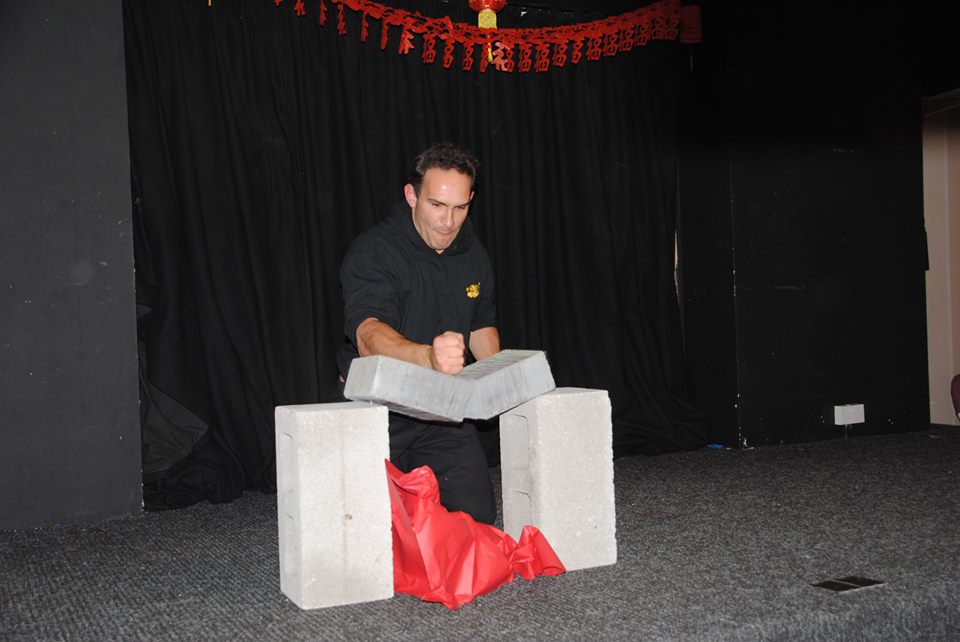 In the previous iron palm article we talked about the rationale for hand conditioning in the context of martial arts and some commonalities in different styles approach to developing the ‘Iron hand‘. In this article I will briefly talk about different methods that various Pai (families) of Chinese martial arts use to develop strong hands and the ability to use them. Some Kwoons (schools) will focus on one method whilst some will use several. The method chosen often reflects the tactics and methods of a style. A style like Zi Men Quan (Character Fingers Boxing) will require strong fingers, whilst Ba Gua Zhang (Eight Diagram Palm) will be better served by developing the palm. Of course the indviduals prefered tactics also play a role. As with all training methods each practice has it strengths and weaknesses. For example a method that practices dropping the hand (such as the bag method) onto a striking surface is an excellent way to develop a relaxed arm and what Chinese boxers call ‘heavy hands’ but a practitioner of this method may find it hard to transfer to skill to a regular strike at an opponent in front of them due to the practice being one step removed from the application. Whereas someone who practices the ‘hanging sandbag’ method will find application easier but may still have unnescessary tensions. A well developed practice may have several stages to develop a rounded fighter (alongside all the other aspects of Kung fu required!). What follows are methods I have personally been exposed to, I am sure there are others. The most important thing about all these methods is they take time and effort!

Before going any further it is important to mention that this article does not give the required details for practice! It just gives an outline of some of the more common methods used. Please do not attempt any method of iron hand without correct tuition!  Without proper breath, qigong and herbal medicines you will weaken rather then strengthen your body!

This is perhaps the most common method. The practitioner has a bag made of strong material placed on a surface about hip height. They then drop the various aspects of the hand onto the bag to learn to minimise tension in the strike. To begin with they allow gravity to drop the hand, over time more waist and leg power is integrated. Some schools do one aspect of the hand (palm, knife hand, fist etc) at a time, other school work with a pattern. The patterns allow the Martial artist to get used to changing the use of the hand rapidly, whilst repeatedly strking with one aspect allows them to perfect that stike. Traiditonally doing one aspect at a time is seen as allowing Qi to pool in the area developing it, whilst vaying the sequence helps the student learn to move the energy with the intent (yi) more quickly. Initially the bag is often filled with mung or soy beans, after 6 months to a years regular practice these are replaced with gravel/and and finally, after several years, iron pellets. Sometimes the student may lift up the bag with a tiger claw after each palm strike for grip strength, or push it away on an inclined table to develop palm heel striking power.

This method uses a wide, fairly shallow container (often a wok) filled with soy/mung beans (these are seen as being cooling and therefore medicional for the hand). The practice then continues in a similar way to the bag method with the hand dropped onto the substrate. This method can be useful if one wishes to develop a very focusses strike as when the strike is not ‘clean’ the beans tend to go everywhere. Cleaning up mess is a good teacher!

This method involves having a deep container filled with sand or soy beans and thrusting the fingers as deeply as you can into it. It may also be practiced with the fist, the leopard fist etc. Often included in the method is upon striking the practisioner opens and closes the fingers, twists the arm or flexes the wrist to develop the forearm and the hand strength. Sometimes the practisioner will grab a handfull of the striking material tightly and squeeze it after each strike, or finish by rubbing the beans/sand hard between the palms to toughen the tissues of the hand. Advanced practitioners may use iron pellets. Due to the harshness of this method often there is a hot herbal medicine to soak the hands in before and after the practice. The heat opens the pores of the hands and allows more medicine to penetrate.

This involve a wide and deep container filled with heavy substrate (such as small river stones and gravel) which the hands are ‘dragged through’ in various formations (I have heard this called ‘stone swimming’ as well), this strengthens the tendons and the flesh. Sometimes the medicine is included in amoungst he stones and the whole container is heated to bring enengy into the hand.

This method (sometimes called ‘splashing hands’ – not to be confused with the style of the same name) involves standing waist deep in a river or to have a big basin in front of you. You then slap the surface of the water with a cupped hand that flexes on impact. The aim is to make a large, evenly shaped (like an oval), splash. This method should be repeated thousands of times until the student is exhuasted.

This Practice involves striking a youngish tree, one needs to start very softly. Depending on the style different methods will be used but the aim is to make the tree shake on the inside, developing a shocking power that can damage an opponent. Some Kung Fu practitioners try to give the tree a shove to show power and make the upper branches wobble – to my understanding this is wrong as, if you try to do this you will find it surprisingly easy but not much use in self defence. Sometimes after striking the tree the student may attempt to grab a handful of bark off it to strengthen the gripping action.

The Da Zhang (Hit post) has many variations in Chinese martial arts. It probably developed from tree striking (above). A post is fixed in the ground, usually with a little give and some kind of padding. It is struck with the various aspects of the hand. Most traditional Chinese arts have some version of the da zhang, for example Ba Gua Zhang practitioners place 9 posts in the ground stepping between them and striking them. These posts often evolved into ‘wooden men’ with wooden arms and legs replicating opponents limbs. Wing chuns wooden man is most known though there are many others – some schools of Choy Li Fut have ten different designs for wooden men. A Northern shaolin wooden man usually has a single wooden strut mimicking a straight punch and a hung gar ‘wooden man’ is a simple a post in the ground.

Of course the most popular form of striking post is the Karate makiwara which forms the backbone of true karate striking. Practised correctly when struck the flex of the post gives feedback to the practitioner as it tests the postures readiness to take feedback and pass it into the feet.

Early accounts of Kung Fu often refer to this as a foundational practice. It is also the one most similar to western boxing’s heavy bag training. A strong bag is filled with sand and hung up. The student then uses his styles techniques to repetitively strike the bag, either repeating the same technique of a short pattern/combination. Later on the bag may be filled with gravel or iron. There are many variations on this theme – tear drop bags for ‘shovel hook’ style techniques, bags fixed to striking posts etc. For example I am told SiJiHao grand teacher had four rugby balls hung at head height and filled with gravel which he used to develop a devastating spinning back fist. Wall bags (sand/gravel bags fixed to a wall) also come under this category but in my experience they have a tendency to develop a weak punch due to the lack of give causing the student to ‘pull their punch’.

These methods (a form of Pai Da) use one hand to hit the other (take, for example, a powerful strong clap repeated a few hundred times) strengthening both of them at once. These methods are very useful as they require no equipment. They also get one used to hitting human flesh and bouncing off it – useful for deflections and instant follow up strikes Some styles (for example Southern Mantis) have partnered variations for example person A. uses a hammer fist to strike person B’s palms then they switch. These are useful exercises as they get you used to striking a person and you can help motivate each other; however you do need a reliable training partner at a similar stage in their development to you available on a daily basis, tough to find in this day and age!

This is where a relaxed arm is thrown out from the core and the centrifugal force increases the blood in the hand. These exercises are then done by the thousand. Examples of this are the Dragon whipping hand and Zi Men Quan’s three gate exercise. Many styles contain motions that may be used fo this purpose and they have a surprisingly powerful effect if practiced diligently.

Some schools have methods which rely entirely on breath work and Qi Gong (energy development) practices to strengthen the hands without any ‘external resistance’ practices. I have met a few groups who practiced this way, though I have to say I have yet to be bowled over by their results! Above are the major methods of Hand Conditioning I have been exposed to. It is a fascinating subject with so much depth. If anyone knows a method that isn’t similar to the ones covered above I would love to hear from you in the comments section below! The next Iron hand article will cover ways of testing your iron hand development, and some common tricks charlatans use to con people into thinking they have stronger hands then they do. Till then, Train Hard, Keep Well, Chris The post Traditional Chinese Methods of Hand Conditioning appeared first on Tao Jia Martial Arts Manchester.

A Brief History of the Lions Roar Martial Art